Mt. Rainier is so majestic! Especially on a nice day! So one beautiful Sunday morning, an adventure was had hiking Skyline Trail… 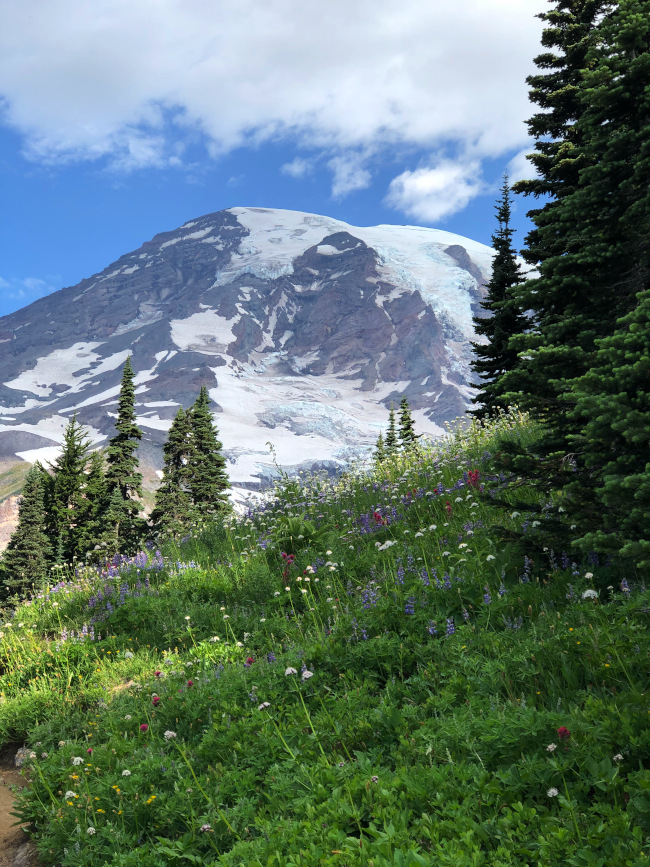 My sister and I made a pact. That given our busy schedules, we would find time to do a major hike at least once a year. Ideally said hike would be during the summer months because my kids would be in school the rest of the time. It’s been a strange summer in WA, and therefore, it was a roll of the dice what kind of day we’d have. Luckily the forecast showed that Sunday to be the hottest day of the week. So we’d venture early toward Mt. Rainier to avoid the heat and the crowds. Because apparently hiking along Skyline Trail Loop is a pretty popular thing to do! And of course it makes sense…as you’ll soon read…

Right from the start

I knew this was going to be an interesting and beautiful hike. For one, the Paradise parking lot was pretty full for being early morning. But also because, as we started out of the parking lot toward Jackson Visitor Center, we spotted a black bear!! IN THE PARKING LOT!! It was so close and unafraid, that I assumed it was used to people. Unfortunately this is not a good thing. The bear was tagged 3 times. And apparently in WA, if a bear is sighted near people a fourth time, they are killed. (Correct me if I’m wrong. This is all hearsay.) 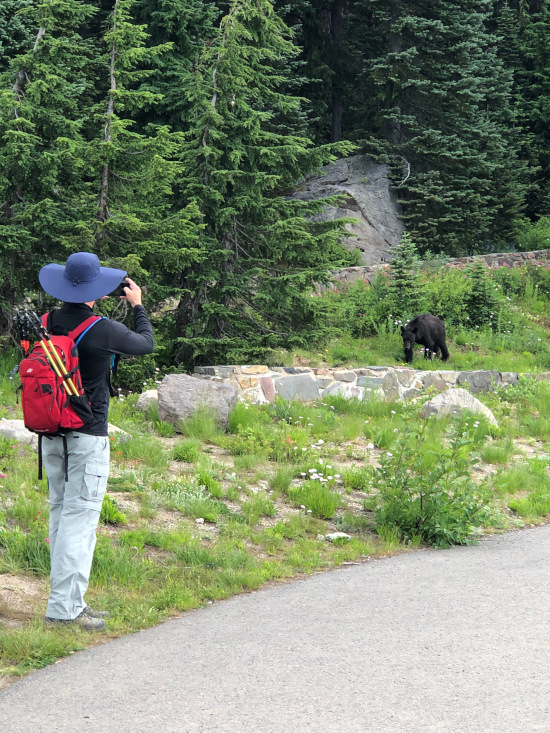 By looking at the trail entrance, I could already see how colorful the trail would be with all the low line trees and bright wildflowers scattered throughout. So we started up…as did everyone else… 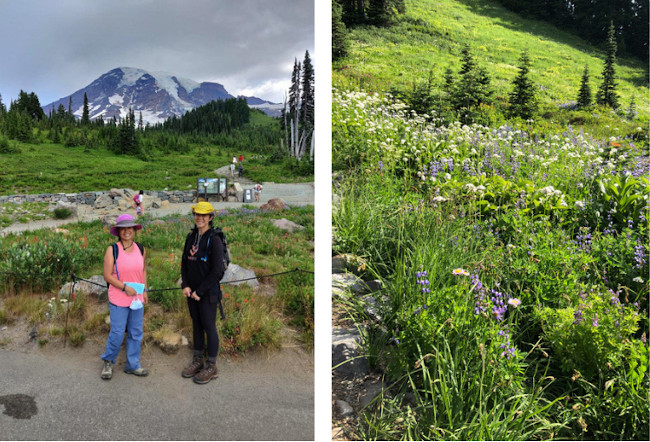 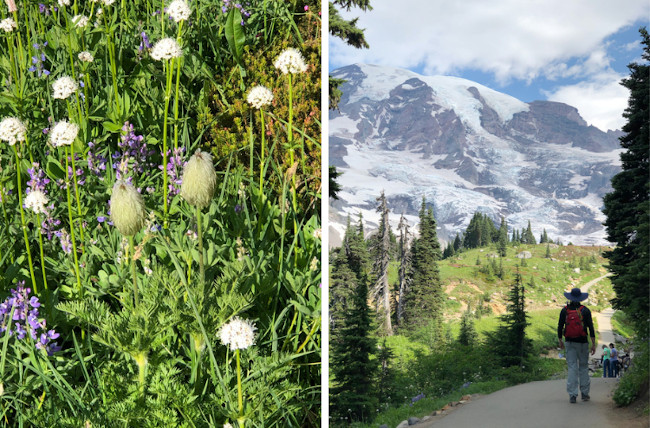 At the beginning of the trail, all the wild flowers were marked and labelled. But I didn’t really pay attention to them. There were so many!! 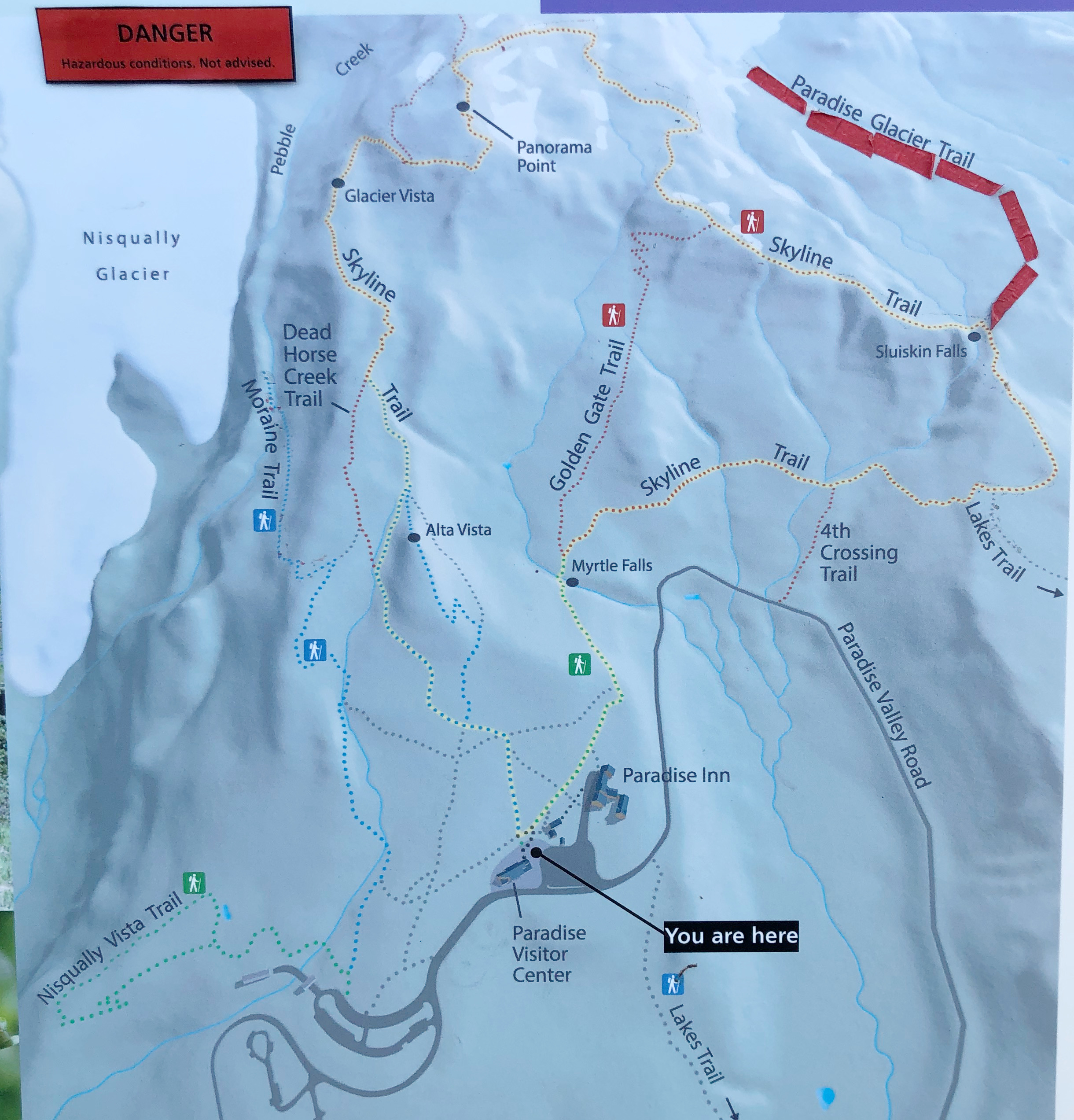 My sister originally wanted to do half the hike we ended up doing. The idea was to start at “You are here”, follow Skyline Trail to Glacier Vista, end at Panorama Point and turn back the same way. That would have probably been about 3 miles with a quick elevation gain to the point. But once we got to the Point, we were all feeling pretty good and decided to move on, find a lunch spot just above it, and continue along down the whole trail. A total of a little over 6 miles of beautiful and varying terrain.

On the way up to Panorama Point, Skyline Trail offered up some amazing views of the Nisqually Glacier. A little waterfall could even be seen! And if you listened carefully enough, you could hear the stream with which the falls met up. 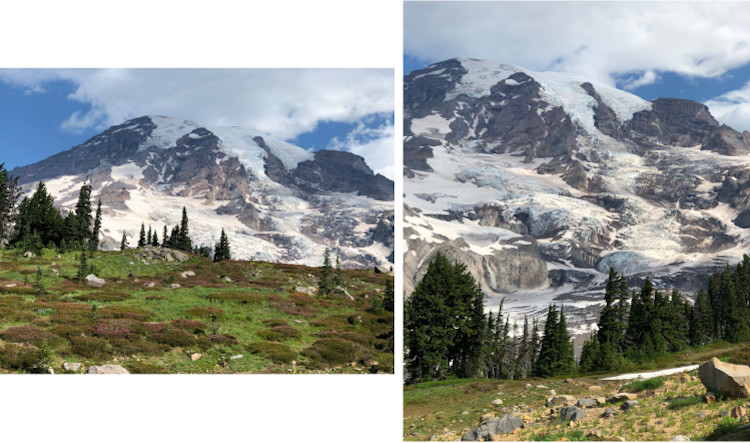 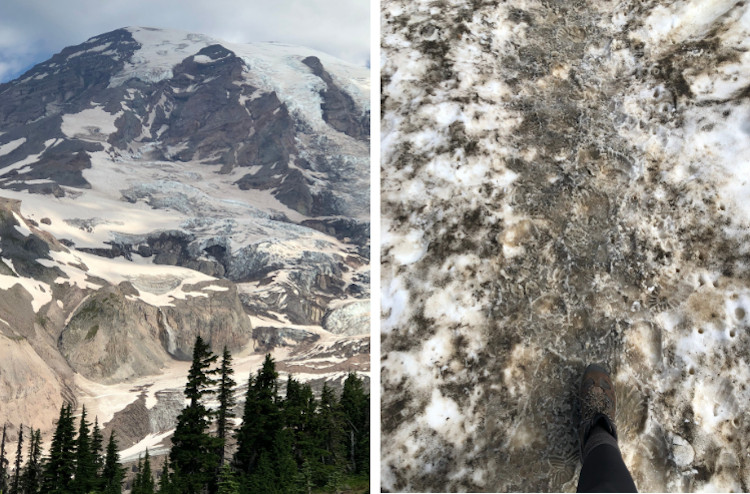 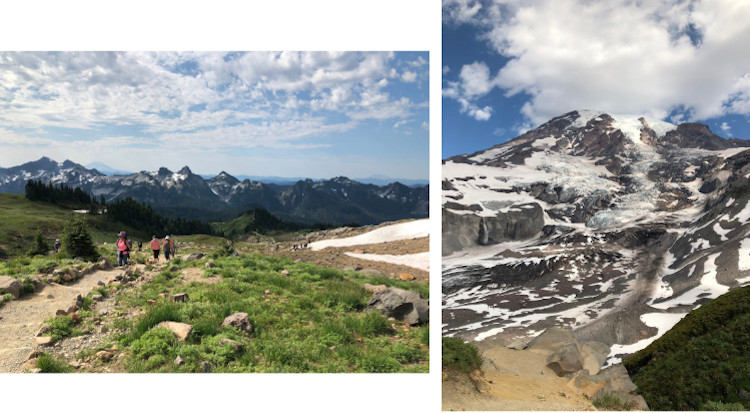 We were also joined by some wildlife – a few marmots. They were cute! One decided to accompany us for a few steps. Probably hoping for scraps of food which we were not eating at the time. Another one struck a pose and waited while the paparazzi snapped their pics. And we found yet another sunning itself on a warm rock! Quite the characters!

We finally arrived at Panorama Point which reaches 6,800′ elevation. The climb was steep at the very beginning. While it did taper off a bit, it did not provide a big relief. 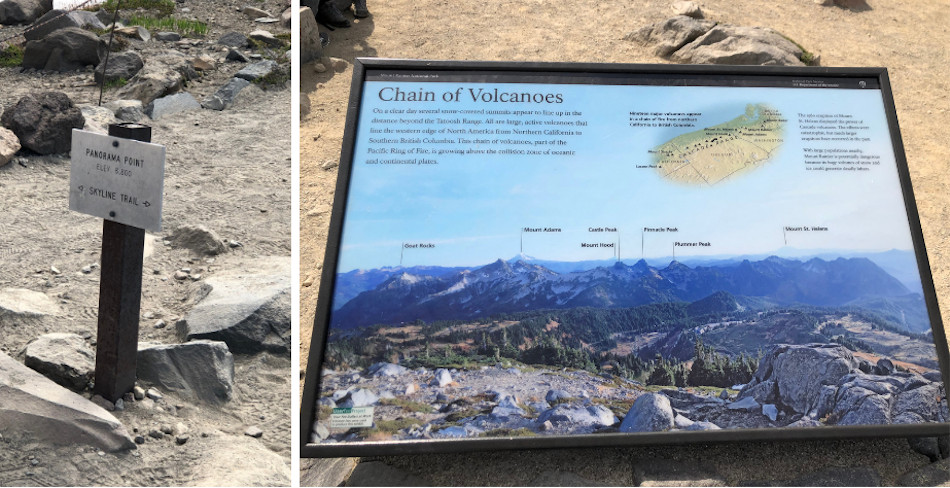 There were many people stopped for a quick lunch. Most social distancing. Some not. It was difficult to get a shot of just the landscape. But through all the people, you could still pick out a range of mountains – Mt. Adams, Mt. Hood, Castle Peak, Pinnacle Peak, Plummer Peak, and Mt. St. Helens, just to name a few. Castle, Pinnacle and Plummer Peaks are actually part of the Tatoosh Range which is a popular hiking range for many. 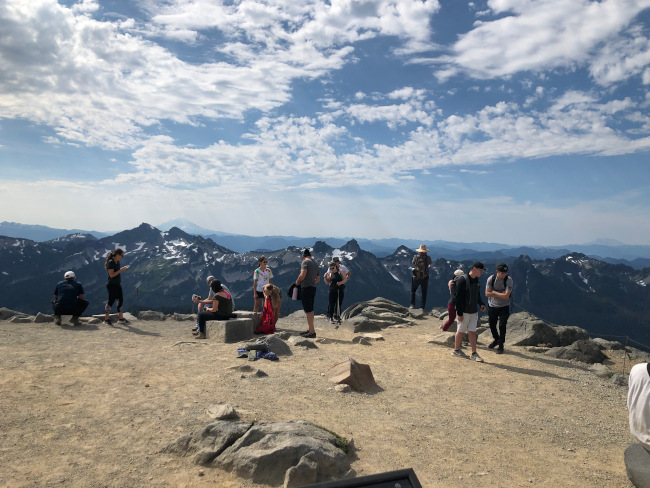 Because of all the people and not a stone to rest, we decided to go up higher and find a spot for lunch. Along the way, I got a nicer look at Panorama Point. The terrain changed a bit at that elevation. But it was still very pretty. We ate overlooking Paradise Valley and all those peaks and mountains. 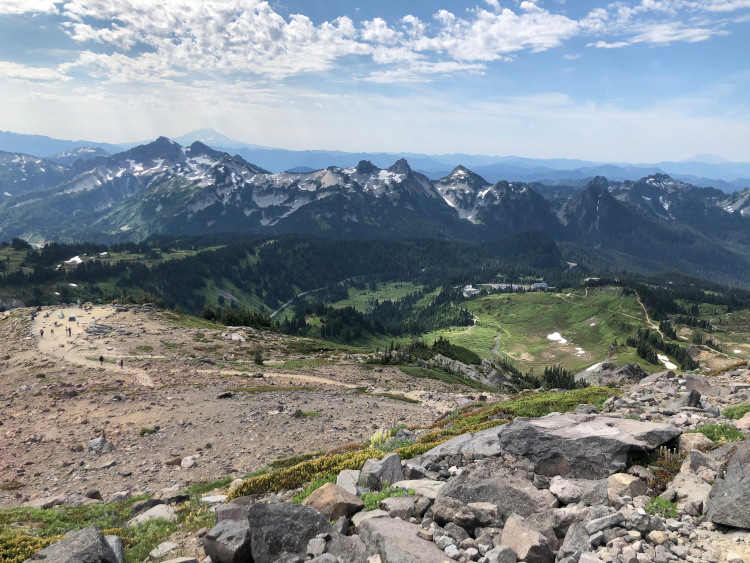 We could have turned back at the Point. But again, we decided to go the loop. Originally my sister thought of cutting the loop a little shorter (by about a mile or so) by taking the Golden Gate Trail. However, when we got to the split, the trail was closed. We found out later that there was an accident and a helicopter flew in to help. Oh well. Looks like we were forced to do the whole loop.

The hills are alive…

My sister wanted to take me on this hike because it reminded her of one of MY all time favorite musicals, Sound Of Music. She wanted me to have the same experience. While it could have been the onset of fatigue, I started being reminded of Sound of Music on the descent. The views were spectacular and breath taking!! All the layers of green were bespeckled with the diversity of wild flowers so abundant wherever the eye gazed. So my next pictures will just speak for themselves. Because my words won’t be able to capture the exhilarating beauty of it all.

I only knew and remembered ONE of these wild flowers. And that was bear grass. It’s the Dr. Seuss-looking things. They were cool looking and felt just as interesting.

These next images was when I definitely started feeling the Sound of Music. And while my sister kept begging me to break out into “The Hills are Alive”, I just kept breathing in the oh-so-heavenly scenery. My silence may have also been due to my tiring legs… It looks flat now. But it wasn’t. 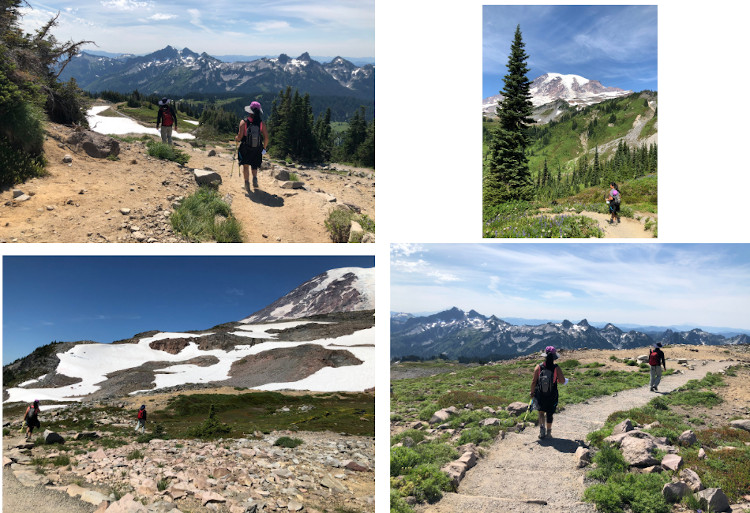 Next group of pictures was definitely a “hills are alive” moment… 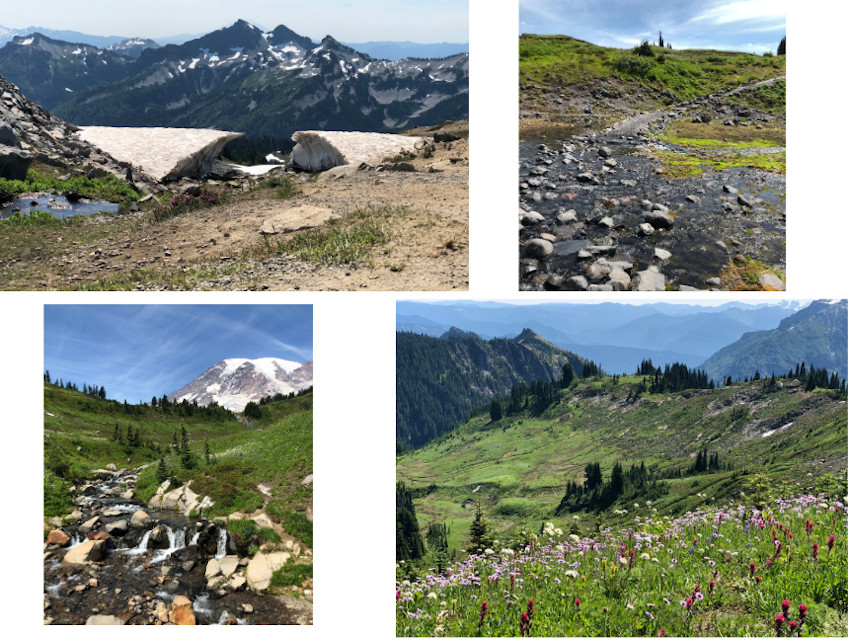 At this point, my sister and I were definitely fading. While we were on the descent, there were still moments of climbing. To slow our pace, we started getting more distracted. However, we knew we were close to the end when we arrived at the serenity of Myrtle Falls.

It was so pretty. We didn’t stay long because a big group settled around taking pictures, munching snacks/lunch, or taking breaks. There really wasn’t a place to sit and relish the sight and sounds.

While it was at a lower elevation than the Burroughs Mountain Loop, this trail was much more challenging. Right from the start, we met a steep incline which did level off. But the ascent was not gradual like the Burroughs Mountain trail was (which provided lots of breaks)! That said, I really REALLY enjoyed this trail! The sights and views were absolutely stunning!! Breath-taking!! If I weren’t so shy, I probably would have sung songs from “Sound of Music”.

But for now, I’ll just think fondly of this eye inspiring hike that filled all my senses with joy and peace! Thank you, sis!

Read about my other hikes