Hiking Weowna Park Loop Trail was nice for my family. This kid-friendly trail has its ups and downs along lush greenery, evergreen and cedar trees.

It’s rare that my husband has time to join my kids and me on fun adventures. So when he suggested we go for an easy family hike on his day off, I was all for it! He gave me two options. I decided that we would be hiking Weowna Park Loop Trail. 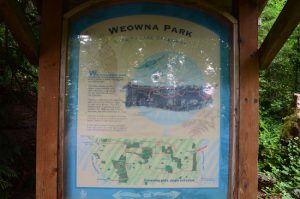 We parked by the empty trailhead and saw that the first leg of the hike was a jaunt up the steepest part of the hike. Luckily I had read about this here. So I warned my husband and kids. “Slow and steady. And deep breaths” was my chant to them. 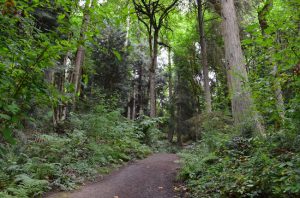 The husband took the lead. I was the caboose thereby sandwiching the kids. (This is something we normally do when we go on hikes.) We slowly made it up to the top where I had assumed the trail would mostly level off for the rest of the time. Unfortunately I was wrong. This would not have been an issue but my husband was walking on a hurt foot (later found to be a torn plantar fascia…eek). But he plowed on as best he could.

The trail follows along the hillside. So the topography was lots of ups and downs. And while it was a cool overcast summer day, the presence of all the evergreens and cedars and the canopy it provided made this hike even more enjoyable. 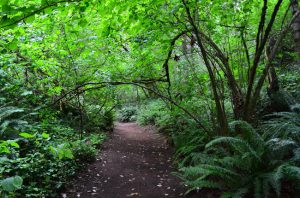 The path itself was nice and easy to walk on due to the soft bark coverage. The ever changing footing was not so nice. But I just really could not get over how green everything was. 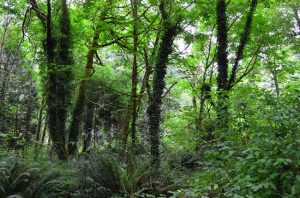 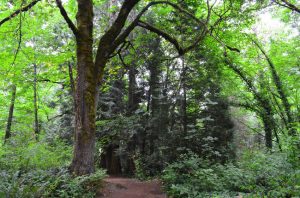 I like to envision myself on some movie-like adventure whenever I go on hikes. For some reason, I always think about Lord of the Rings. (Truth be told, my mind always goes to Lord of the Rings whenever I’m hiking.) And what I typically envision is an oncoming battle with orcs and trolls hiding in the brush. Where were Gimli, Legolas, and the elves?? Oh, probably somewhere on Middle Earth. 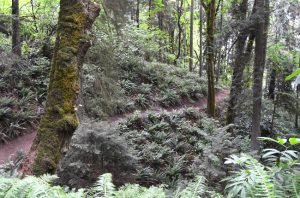 Our turn around point came at the hidden waterfall. This waterfall is created by the man-made Phantom River that follows along the path. HOWEVER, we did not notice this river. Because there was no water. Definitely not enough water to make up the fall. So what we came upon was this: 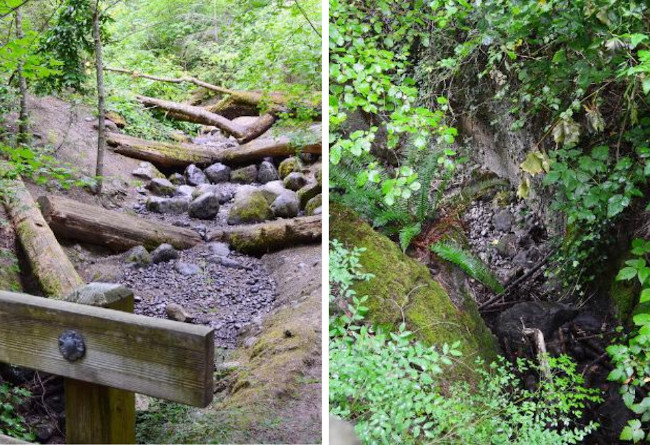 All dried up, but pretty nonetheless.

The sayings of rocks

One other interesting part of this hike was finding little gems along the path. And not just any rocks. Decorated rocks. 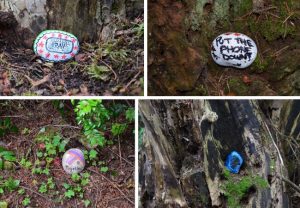 The artistry of stumps and cedars

So much of the beauty of this hike was not only in all the greens or even the messages on the rocks; but there was also beauty in the moss covered grooves on all the trees. It was like an inviting ascension to break from the cover of the canopy. Here are just two of those trees: 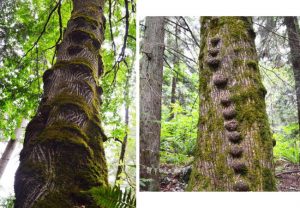 And such was the enchanting linearity of these evergreens and cedars. There is something so mathematically attractive to lines and curves. It’s almost meditative for me. And when you throw earthy colors at it… 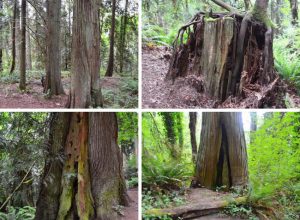 We may not have done the full loop. But we did complete nearly 3 miles of it. And we each took away something different from this quick jaunt.

My take? I went into this hike needing a break. From everything going on at home and in the world. One of the easily accessible sceneries that quickly kicks me out of reality is that of greens and trees. And this hike was not short of any of that.

Yes, it took effort to get up and down the steep parts. But because of those challenging sections, I don’t think I would have focused on my breath; and therefore, it probably would not have been as introspective for me.

The rocks may or may not be there next time. They may even be changed out. But they definitely helped get me out of my head and back into my heart and what I find absolutely loving and good and truly beautiful.

So give it a try! Get out on an adventure! To a hidden gem in your area. Breathe and take in all that nature is feeding you. And then let me know how it was. We’re in this together. So lets put down our phones. Lets be brave. Lets be calm. Lets breathe…

Read up on my other hikes