Summer is the season of watermelon! Since all parts of the fruit are edible, what can I do with all that rind? I can try making pickled watermelon rind! 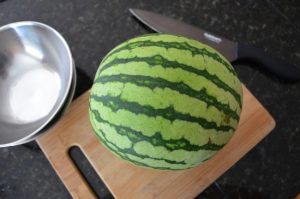 Who doesn’t love a nice big juicy slice of watermelon during the hot summer months? Chomping down on that crunchy flesh and having the juice drip down the sides of your mouth? Your arms covered with that sticky sweet nectar… And then you toss the white bitter fleshy part away. The rind. No one wants it. But you have so much of it. So what do you try? You try making pickled watermelon rinds!

Pickled watermelon rinds. Have you ever heard of it? I never have. That is until I read Laura Ingalls Wilder’s Little House series. Now I’m a child of TV. And I loved watching this show! It was one of my all-time favorites. But I never read the books until much later. And the books, as is most often the case, are just so much more, have so much more, are just rich with so much more.

Being a city girl who loved watching Little House on the Prairie, I was always impressed with life in the 1800s. The idea of raising and growing and making and producing all your own stuff, from scratch, was overwhelming, and yet, so inspiring. And in her books, Wilder speaks precisely about this homesteading life. And because of one of her books, I decided to try this.

Almanzo ate the sweet, mellow baked beans. He ate the bit of salt pork that melted like cream in his mouth. He ate mealy boiled potatoes, with brown ham-gravy. He ate the ham, he bit deep into velvety bread spread with sleek butter, and he ate the crisp golden crust. He demolished a tall heap of pale mashed turnips, and a hill of stewed yellow pumpkin. Then he sighed, and tucked his napkin deeper into the neckband of his red waist. And he ate plum preserves, and strawberry jam, and grape jelly, and spiced watermelon-rind pickles. He felt very comfortable inside.

There you have it! Almanzo had pickled watermelon rinds!

I looked up some rind recipes. Many of them were not shy on the spices. Cloves and allspice, nutmeg and cinnamon to name the most common. That’s not what I wanted to try. So I decided to keep my ingredients simple. 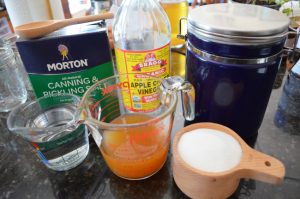 Boy, was I surprised when I cut into this watermelon! I expected to see red flesh. But that’s not what I saw.

The yellow and orange watermelon varieties tend to be much sweeter than the red ones. However this does not affect the bitterness of the rind. So I continued with the process, cut them into spears, and softened them in a pot of salted boiling water.

You only need to boil until the rind is softened to your liking. So depending on the thickness of the rind and your preference, you’ll boil them anywhere from 2-4 minutes. It really shouldn’t take that long. Once done, strain and allow the rind to cool.

While your rind is cooling, mix all your pickling ingredients (vinegar, sugar, and salt) together into a saucepan with some water. Boil the mixture until all the sugar and salt have dissolved. I did decide, at the last minute, to add some cinnamon to my pickling ingredients.

Fill your storage jar with your cooled rinds. And add the pickling solution leaving room at the top. 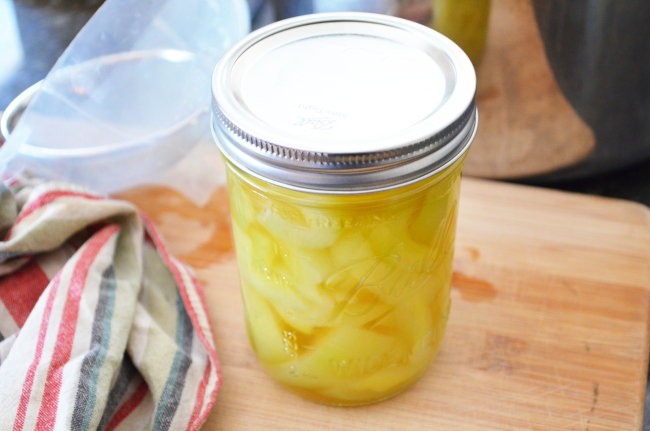 This will keep in the refrigerator for up to 2 weeks, unless you enjoy them sooner than that. Because they are truly a delicious snack!

Give it a try! I’m sure at some point, you’ll buy a watermelon. So you’ll have the rind leftover. Instead of tossing it in the bin, it won’t take long to whip this up.

Some other recipes that are my attempts at homesteading

Read up on my other first attempt recipes 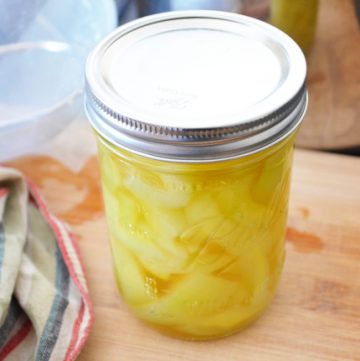 Summer is the season of watermelon! This quick recipe shows that even the rind can be a wonderfully tasty treat to enjoy, even as summer comes to a close.
Print Recipe Pin Recipe
Prep Time 10 mins
Cook Time 4 mins
Total Time 14 mins
Course Snack